Laugh, And Save The World

Miserable people are dangerous for the simple reason they don’t care whether the earth survives or not. They are so miserable that deep down they may think it would be better if everything were finished. Who cares, if you are living in misery?

Only happy people, ecstatic people, dancing people would like this planet to survive forever.

Seriousness is simply a sickness of the soul, but sincerity is altogether a different phenomenon.

A serious man cannot laugh, cannot dance, cannot play. He is always controlling himself, he has become a jailer to himself. The sincere man can rejoice sincerely, can dance sincerely, can laugh sincerely. And in laughter your body joins, your mind joins, your being joins – the divisions disappear, the schizophrenic personality disappears.

Laughter brings your energy back to you.
Taking laughter away from you is spiritual castration. 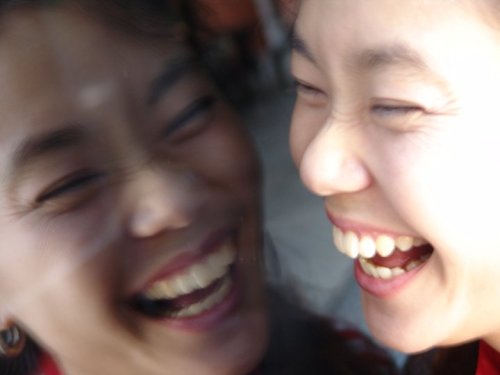 The people who have gathered around me are learning how to be more happy, how to be more meditative, how to laugh more, live more, love more, and spread love, laughter around the world. This is the only protection against nuclear weapons.

If the whole globe can learn to love and laugh and enjoy and dance, then Ronald Reagan and Mikhail Gorbachev will look surprised: What has happened? The whole world seems to have gone mad!

People who are happy, contented, are not the people to be forced to kill other people who have not done any harm to them. It is not surprising that all the armies down the ages have been kept sexually repressed – because those sexually repressed people are bound to be destructive. Their very repression forces them to destroy something.

Have you ever watched in your own being – when you are happy, joyful, you want to create something. When you are miserable, suffering, you want to destroy something. It is a revenge. All the armies are kept in a state of repressed sexuality so the moment they get to kill, that becomes their joy. At least their repressed energies are expressed, of course in a very ugly way, an inhuman way. But some expression is there.

Have you ever noticed painters, poets, sculptors, dancers are never sexually repressed people. In fact, they are oversexual; they love too much. They love too many people. Perhaps one person is not enough to exhaust their love. They have been condemned by the priests down the ages: “These poets, painters, sculptors, musicians, these are not good people.” And these are the only people who have made this humanity something beautiful, who have contributed to the world some flowers of joy, some flowers of music, some beautiful dances. It is one of the fundamentals of life that unless you create, you don’t reach to your fullest dignity.

We need a great respect for creative people of any dimension.

It depends on us.

This crisis gives a chance for courageous people to disconnect themselves from the past and start living in a new way – not modified, not continuous with the past, not better than the past, but absolutely new.

And it has to be done now – because the time is very short. By the end of the twentieth century, either we will enter into the first century of a new history of man or there will be no one left, not even a single wildflower alive. Everything will be dead.

Apart from neutron bombs, which already exist, there are experiments going on in the Soviet Union and perhaps in America too, on death rays. Rather than dropping the bomb, it is far easier to spread death rays which simply kill the living people, the animals, birds, trees. Only dead things – houses, temples, churches – will remain. It will be really a nightmare. And those death rays are not visible. We know they exist, they are just trying to find out how to spread them, how to reach a certain destination and destroy all living beings that they come across.

We need more happy people around the earth to prevent the third world war. These nuclear weapons and these destructive war machines cannot work by themselves. They are being worked by human beings; behind them are human hands.

A hand that knows the beauty of a rose flower cannot drop a bomb on Hiroshima.

A hand that knows the beauty of love is not the hand to keep a gun loaded with death. Just a little contemplation and you will understand what I am saying.

If you want to change the world into a totally new phenomenon with a new human consciousness, you will have to take this whole earth away from the hands of the politicians and the priests. Man has to be freed from these monsters.

Our work is to teach people consciousness, more awareness, more love, more understanding, more joy, and to spread the dance and celebration around the earth.

Reduced to one single statement, I can say: if we can make humanity happy, there is not going to be any third world war.

OSHO – Hari Om Tat Sat: The Divine Sound – That Is the Truth

8 responses to “Laugh, And Save The World”